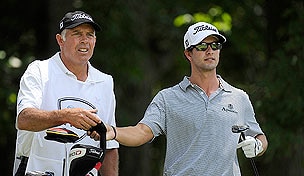 Whether you side with Tiger Woods, Steve Williams or don’t have a cat in the fight in the increasingly curious case of “Player v. Caddie,” you can admit the following reeks of irony.

Woods divorced from Williams only after the caddie wasn't faithful to him and started seeing another player.

Here’s everything we know about what went down: When Woods announced that he wouldn’t be competing in the U.S. Open, Adam Scott – who had recently fired his caddie, Tony Navarro – asked Williams if he would temporarily serve in the role for him. The looper received his boss’ permission and was on the bag at Congressional, where Scott missed the cut.

Two weeks later, Williams again caddied for Scott at the AT&T National, helping the player to a T-3 result before Woods summarily dismissed him from his day job on Sunday of that week.

At some point in between those two events, Tiger’s blessing turned into a curse for the man he calls Stevie.

Now that it’s over, the breakup is newsworthy for a few reasons.

First and foremost, although such records aren’t kept, this was likely the game’s most successful caddie – in both major championship victories and money earned – getting the axe. Williams was on the bag for 13 of Woods’ 14 major wins and pocketed enough over the years that he was able to donate $1 million to charity three years ago.

What tugs at the heartstrings of gossip columnists, though, is the fact that the two men became very good friends during the course of their working relationship, with Woods even serving as best man in Williams’ wedding. The caddie remained with his player not only through injuries and swing changes, but a highly publicized personal scandal, as well.

And that’s what irks Williams the most in the aftermath of this decision.

“To be let go after a period where I’ve stuck through thick and thin, and I’ve been incredibly loyal to the guy, that’s what I find disappointing,” he told New Zealand’s TV3 News on Wednesday. “You’ve got to gain someone’s respect and what Tiger went through at the completion of 2009, I told him when I first met up with him again in 2010 at Augusta that he had to earn my respect back. He was aware of that and he would know right now that I’ve lost a tremendous amount of respect for him. Through time, I hope that he can gain my respect back.

The situation preys on the old bagman axiom amongst the professional ranks: There are two types of caddies – those who have just been fired and those who are about to be fired.

Williams, who caddied for the likes of Peter Thomson, Ian Baker-Finch, Greg Norman and Raymond Floyd prior to Woods, knows that as well as anybody.

“It’s always inevitable,” he explained, “but I was disappointed.”