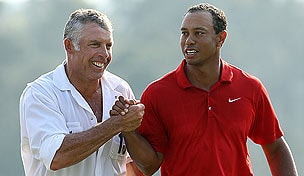 The most prolific player-caddie tandem in the history of the game has ended. According to Tiger Woods’ website the former world No. 1 and his longtime caddie Steve Williams “will not be working together in the future.”

“I want to express my deepest gratitude to Stevie for all his help, but I think it's time for a change,' Woods said in a statement on TigerWoods.com. “Stevie is an outstanding caddie and a friend and has been instrumental in many of my accomplishments. I wish him great success in the future.”

Williams, who began working with Woods in March 1999 and was on the bag for 13 of his 14 major championships and 63 of his 71 PGA Tour titles, began working for Australian Adam Scott at last month’s U.S. Open, but said at the time the move was temporary and that he would return to Woods’ bag when he recovered from injuries to his left knee and Achilles’ tendon.

In a press release from Williams, the New Zealander said he was informed after the AT&T National that he would no longer be caddying for Woods, news that surprised the veteran looper.

“After 13 years of loyal service needless to say this came as a shock. Given the circumstances of the past 18 months working through Tiger's scandal, a new coach and with it a major swing change and Tiger battling through injuries I am very disappointed to end our very successful partnership at this time,” Williams said.

“I have had the opportunity to work of late for Australian Adam Scott and will now caddie for him on a permanent basis. Having started my caddying career with Australian great Peter Thompson and working for Greg Norman in the (1980s) I am excited about the future working for another Australian.”

Williams, who was in Woods’ wedding, was even more pointed in an interview with New Zealand’s TV3 News on Wednesday, “I've stuck by him through and through. Now he decides things aren't going well for him, and I'm down the road, so the timing's very disappointing.”

According to Woods’ website, no replacement caddie has been named and no decision has been made on when Woods would return to the Tour.

Woods withdrew from The Players Championship in May because of his injuries and some have speculated that he may not be healthy enough to return in time for next month’s PGA Championship.