Scott can knock off Woods at Doral as world No. 1 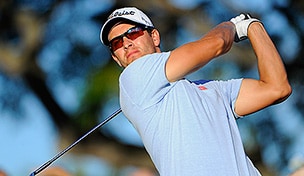 The hits keep coming for Tiger Woods: He’s now in danger of losing his No. 1 spot in the world rankings.

Adam Scott likely would move to world No. 1 for the first time in his career if he wins this week’s WGC-Cadillac Championship and Woods finishes outside the top 5-7, according to Golf Channel world-rankings guru Alan Robison. An official projection will be released later this week.

Scott would need a minimum of 60 points to pass Woods in the rankings; last week’s Honda Classic awarded 60 points for the winner, and this week’s WGC field is stronger. Last year, Woods earned 74 points for the Doral win, while Justin Rose received 78 in 2012.

If Scott won, he would have 10.16 average points. Woods, currently at 10.04, would need to earn 14 world-ranking points to overtake that number. Last year, a top-6 finish earned 14 points.

World No. 3 Henrik Stenson would not be able to reach No. 1 even with a victory this week in Miami.

Defending champion Woods is a four-time winner at Doral, but the course underwent a renovation after last year’s tournament. He is also questionable to play after withdrawing from the Honda because of a lower-back injury.

In eight career starts at Doral, Scott has only three top 10s, including last year’s T-3.