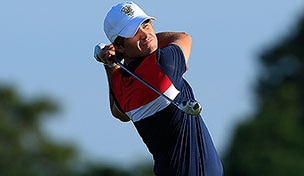 WINDERMERE, Fla. – Alabama senior Bobby Wyatt has been ranked inside the top 10 in the world. He has represented the United States in the Walker Cup, and been named to the first-team all-conference team, and helped the Crimson Tide win the NCAA Championship.

The only thing he hasn’t done, really, is win a tournament. He is 0-for-college.

“It’s definitely something that’s been on my mind,” he said Monday at the Isleworth Collegiate, where he has yet another chance to get off the schneid, sitting two shots off the lead of teammate Trey Mullinax heading into the final round here.

Alas, that’s been an all-too-familiar scenario for Wyatt.

Five times he’s been a runner-up at a college tournament – each time to a teammate. A few of those victories went to Justin Thomas, Wyatt’s Walker Cup teammate who was the NCAA Player of the Year in 2011-12. “And maybe now that Justin is gone I’ll get my chance,” Wyatt said, smiling.

Mullinax, meanwhile, has been an emerging force for the No. 1-ranked Tide, who have won their first two events of the fall and will take a 11-shot lead into the final round at Isleworth. The No. 5 man on last year’s NCAA team, the senior made the switch to swing coach Todd Anderson at the end of the summer and has experienced near-immediate results. He has finished T-4 and second, respectively, in two fall starts.

With a 10-under 134 start at Isleworth, he has a two-shot lead over Wyatt.

“This has been by far the best start of any year I’ve had,” said Mullinax, who last year won the Savannah Quarters as an individual, “and I’m just trying to keep it going each day.”