Yang shares lead in Phoenix after 7-under 64 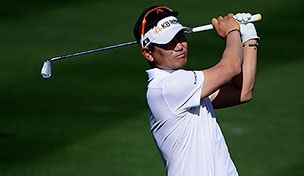 Getty Images
“I’m playing in the Masters. It’s obviously very important to me, and I want to be there. I’ve worked a lot on my game and I’m looking forward to competing. I’m excited to get to Augusta and I appreciate everyone’s support. “ - on his return to competition.  -

SCOTTSDALE, Ariz. – The very thing that has caused Y.E. Yang to struggle recently may be the very thing he needs to do to win this week at the Waste Management Phoenix Open.

What’s the one thing, you ask? Be aggressive.

Yang posted a near-flawless 7-under 64 at TPC Scottsdale Thursday to share the lead with Bubba Watson.

“(Before recently), I tried to force a lot of my swings and putting, was being a little bit too aggressive, trying too hard,” Yang said. “So I eased up on everything.”

Easing up may be the reason he finished T-28 last week at the Famers Insurance Open, his lowest finish in 25 starts, dating back to his T-20 at the 2013 Sony Open.

But at TPC Scottsdale, where winning scores are always a couple- dozen under par (last year Mickelson won with a 28-under 256 total), easing up may not be the answer.

“I think you have to be aggressive … at the same time, you can’t be too aggressive. You really have to balance it out.”

It remains to be seen if he can find that balance, that yin to his Yang this week.