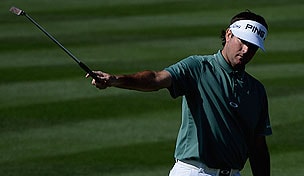 SCOTTSDALE, Ariz. – Bubba Watson is chasing his first victory since slipping on the green jacket at the greenest show on grass. With a two-shot advantage heading into the Waste Management Phoenix Open final round, the sprightly southpaw is looking for PGA Tour win No. 5. Here’s what You Oughta Know heading into the Phoenix finale:

• This is the seventh time Watson has either shared the lead or led outright heading into the final round of a PGA Tour event. The last time was at the Travelers Championship in 2013 where Watson went into Sunday tied with Charley Hoffman and Graham DeLaet and shot an even-par 70 to finish solo fourth. Watson had a two-shot lead on the 16th hole Sunday at last year's Travelers, but hit his ball in the water and made triple bogey.

• Watson has a chance to become the fourth consecutive WMPO champion to record all four tournament rounds in the 60s.

• Kevin Stadler is looking for his first win on Tour. Ten players have made the Waste Management Phoenix Open their first Tour win, including five at the TPC Scottsdale (Paul Azinger ’87, Tommy Armour III ’90, Jesper Parnevik ’98, J.B.Holmes ’06, and Kyle Stanley ‘12).

• Just two years ago, Kyle Stanley came from six shots back in the final round to overtake Spencer Levin and earn his first PGA Tour title. Eleven players are within six shots of Watson.

• Ryan Moore, who is tied for third at 12 under, is looking for his second win of the 2013-2014 season after having won the CIMB Classic in October.

• Brendan Steele’s bogey-free 9-under 62 in Round 3 is the lowest round this week in Phoenix. It is also a new career low; his previous best round was a 64 at the Humana Challenge in 2013.