Key facts for the AT&T Pebble Beach final round 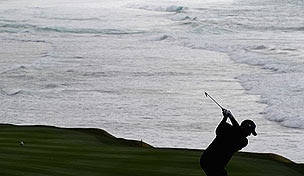 As the Clambake survivors prepare to convene on Pebble Beach for the final round on Sunday, here’s what you need to know.

Charlie Wi is gunning for his first PGA Tour win and is one round away from his first trophy in 163 career starts.

His best chance to win prior to this week came last year, when he finished runner-up to David Toms at Colonial. Wi carried a one-stroke lead into the final round but could not seal the deal.

If he doesn’t get the job done on Sunday, however, Wi still has 386 PGA Tour starts before he surpasses Jay Delsing as having the most starts without a win.

Watch out for Tiger Woods on the back nine on Sunday.  Woods’ best nine-hole stretch of the week came on the back nine at Pebble – his first nine – on Saturday. He shot a 32 to charge into contention.

A Saturday back-nine charge was also central to Woods’ challenge for the 2010 U.S. Open. On that day, he came home in 31 strokes to get within five shots of Dustin Johnson heading into the final round.

Woods dismissed the comparison after play on Saturday, saying, 'The Open's infinitely harder.”

Absolutely, but ending a two-plus-year skid on the PGA Tour is a tough hurdle to jump, as well.

Tiger Woods and Phil Mickelson will play together in the final round at Pebble Beach. The last time they had such a marquee pairing was at the 2009 Masters. Both players were out of contention for the green jacket, but Mickelson shot 67 and Woods had 68 to make a charge at eventual winner Angel Cabrera.

Entering that Sunday, each trailed by seven shots. Woods is four back and Mickelson lags by a half-dozen, so expect fireworks right out of the gate.

Three years ago, Mickelson’s agent Steve Loy said of the Augusta round, 'A couple of shots could have changed the whole world.'

If either can finish the Monterey job on Sunday, it will shake the golf world.

Padraig Harrington may have faded late on Saturday at Spyglass Hill, but his pro-am partner has allowed the team to maintain a huge lead in the pro-am. Harrington and Irish billionaire J.P. McManus lead the field by three shots.

Harrington is at 8 under, while the team is at 31 under. McManus, a 14-handicap, has contributed 23 shots to the team. At just under eight shots per round, let the accusations of sandbagging begin. In fact, they already have – on McManus’ Wikipedia page.

“Just amazing that a player like McManus with such a high handicap would all of a sudden, shave nine or 10 strokes per round off his game, especially under the pressure of playing in front of thousands on a foreign course. A true miracle of sports,” a recent addition says.

Having made a lot of money in gambling on sports and horse racing, McManus probably has a few Euro on his own pony this week.

The duo has a winning past, however dubious McManus’ stated index is. They have teamed twice to win the Alfred Dunhill Links pro-am.

If Harrington and McManus do win the pro-am title on Sunday, the Dubliner would be only the second European and fourth foreigner to claim the win since 1982. The only other European to do it? Fredrik Jacobson in 2008.

Expect a Sunday shootout at Pebble Beach. It has been the easiest of the three courses in the Clambake’s rotation this week.

Pebble Beach played to a stroke average of 72.4, while Monterey Peninsula's Shore Course came in at 70.8 for the par-70 track. Spyglass Hill was the toughest, with the field playing to an average of 73.2.