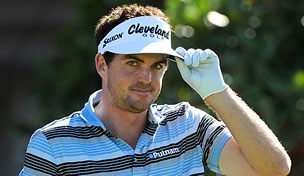 After three rounds in sweltering conditions, a crowded leaderboard has emerged at the CIMB Classic. Here's what You Oughta Know heading into the final round in Malaysia, where Ryan Moore and Chris Stroud share the 54-hole lead:

• Leading after an opening-round 63, Moore returned to the top of the leaderboard with a 3-under 69 Saturday. A two-time PGA Tour winner, Moore last hoisted a trophy at the 2012 Shriners Hospitals for Children Open and finished T-9 last week in defense of that title. This is the fourth time Moore has taken at least a share of the lead into the final round; last year's triumph in Las Vegas stands as the only prior time he converted that position into a victory.

• Stroud will join Moore in Sunday's final pairing as he looks to win on the PGA Tour for the first time. The 31-year-old came closest to the winner's circle in June, when he lost a sudden-death playoff to Ken Duke at the Travelers Championship after chipping in for birdie on the 72nd green to force extra holes. Stroud has had success by limiting his mistakes this week in Kuala Lumpur, carding just three total bogeys across 54 holes.

• The top Asian through three rounds, Kiradech Aphibarnrat sits one shot off the pace as he looks to claim his first PGA Tour title. A rising star on the Asian Tour, the 24-year-old Thai is no stranger to success on the U.S. circuit; Aphibarnrat contended through two rounds at this year's WGC-Bridgestone Invitational before tying for 40th and finished T-25 the following week at the PGA Championship at Oak Hill.

• Just weeks shy of his 47th birthday, Jerry Kelly is a surprise contender this week in Malaysia and enters the final round in fifth place, just two shots off the lead. A veteran of the PGA Tour for nearly 20 years, Kelly was forced to use a one-time career earnings exemption to keep his card in 2013. After finishing 79th in the FedEx Cup points race last season, the Wisconsin native is now in position to challenge for his fourth career Tour title and first since the 2009 Zurich Classic of New Orleans.

• A total of 10 players find themselves within four shots of the lead heading into the final round, which is far from an insurmountable deficit in this event. In last year's tournament, played nearby at The Mines Resort, Nick Watney rallied from a four-shot deficit, carding a final-round 61 to win the event by one shot. Sergio Garcia and Kyle Stanley both trail by four through 54 holes, each eager to repeat Watney's feat from a year ago.

• After three straight rounds of 70 or better, Stewart Cink now finds himself in position to claim his first PGA Tour title since winning the British Open in 2009. Following his breakthrough major triumph, the 40-year-old has seen his world ranking plummet to No. 161 as his opportunities to win have been few and far between. Tied for sixth and just three shots off the lead in Kuala Lumpur, though, Cink has a great chance to contend Sunday as he looks to record just his second top-five finish since 2009 (fifth, 2013 AT&T National).

• Despite needing 10 more shots to complete the third round than he took during his second-round 66, Keegan Bradley remains in the hunt at 9 under, three shots off the pace. Having forfeited the four-shot advantage he held through 36 holes, the former PGA champion is vying for his first win since the 2012 WGC-Bridgestone Invitational.