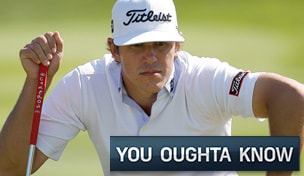 SAN MARTIN, Calif. – Brooks Koepka leads George McNeill and Jason Kokrak by two strokes through 54 holes of the Frys.com Open. Here are some things You Oughta Know entering the final round at CordeValle Golf Club.

• Koepka is competing in his first career regular Tour event. He has four wins on the European Challenge Tour, two of which came as the leader entering the final round.

• Koepka is in this week on a sponsor exemption. Lee Westwood was the last player to win a Tour event on a sponsor invite, doing so at the 2010 Fedex St. Jude Classic. Before that, Jason Gore won the 2005 84 Lumber Classic.

• Vijay Singh, who is three off the lead, has won 34 times on the PGA Tour. That is 29 more Tour wins than the combined total of the rest of the players inside the top 20 on the leaderboard.

• Other than Singh, only McNeill (2), Robert Garrigus (1) and Will MacKenzie (2) have PGA Tour wins, among the top 20 on the leaderboard.

• This is the seventh edition of the Frys.com Open. Only two 54-hole leaders have held on to win: Troy Matteson (2009) and Rocco Mediate (2010). Mediate is the only player to do it at CordeValle.

• Two winners have made the Frys.com Open their first PGA Tour victory: Bryce Molder (2011) and Blixt.

• Three of the previous six Frys.com Open events have gone into a playoff.