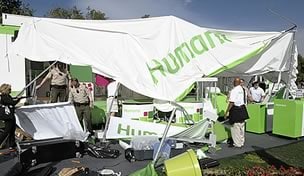 He may look more guileless than a church usher steering folks to their pews on Sundays, but if you’re trying to take a final-round lead away from him, keep your guard up. He’s liable to knock your teeth out ... and then politely help you pick them up.

A backyard brawler lurks behind those altar-boy eyes.

Wilson, 37, knows how to win. In Sunday’s finish to the Humana Challenge, he will be going for his fifth PGA Tour title.

Though he doesn’t actually have the final-round lead yet, Wilson goes into Sunday atop the leaderboard after Saturday’s third round was suspended because of high winds in a desert sandstorm. Through 51 holes, Wilson is three shots up. In the four times Wilson has held or shared the lead going into the final round of a PGA Tour event, he’s won three times. His only failure? The 2009 Memorial.

• Wilson has apparently discovered something about prepping for a new season. He got off to a hot start last year, winning two of his first three starts (Sony Open, Waste Management Phoenix Open).

• Ben Crane made the cut for the ninth time in nine tries in this event, but he has his sights set on something larger.

Like Wilson, Crane, 35, is going for his fifth PGA Tour title. He is just three shots behind Wilson. If Crane wins, it will be his second title in his last five starts, dating back to his victory at the McGladrey Classic last fall.

When play was suspended, Garrigus was 9 under on the day through 13 holes on the Nicklaus course. He is also right in the middle of the hunt in a bid to win his second PGA Tour title. He trails Wilson by five.

• The weather is supposed to improve Sunday, with the forecast calling for cool and partly sunny conditions, with a high temperature in the upper 60s. More importantly, those unruly, gusting winds are supposed to fade, blowing less than 10 mph.

The Humana Challenge coverage will begin an hour earlier than originally scheduled, with the Golf Central pregame show airing at 2:30 p.m. (ET) and tournament coverage beginning at 3 p.m. (ET)

The third round is scheduled to resume at 10:30 a.m. with the final round beginning at 1 p.m. off the first and 10th tees. The final pairing should go off around 3 p.m.