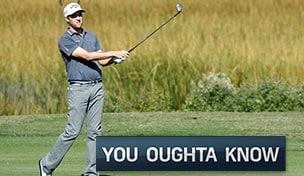 Getty Images
Rory McIlroy rallied to win the Australian Open for his first victory of 2013, his first title since the 2012 European Tour finale in Dubai. It marked his 11th official professional win, worldwide.  -

ST. SIMONS ISLAND, Ga. – With calmer winds leading to lower scores Saturday at Sea Island Golf Club, a crowded leaderboard has emerged at the McGladrey Classic. Here’s what You Ought Know heading into the final round on the Seaside Course, where Chris Kirk and Briny Baird share the lead:

• A 2007 graduate from the University of Georgia, Kirk was a former member at Sea Island until relocating to Atlanta earlier this year. This marks the second time he has taken at least a share of the lead into the final round of a PGA Tour event, having converted his first opportunity at the 2011 Sanderson Farms Championship into his maiden victory.

• Playing this season on a major medical extension after surgeries to both shoulders in 2012, Baird is in search of his first PGA Tour win in his 365th career start. With $12,699,237 in career earnings, he has won more money than any other active player still without a victory to his credit.

• Making his 236th career PGA Tour start, Kevin Stadler hopes to notch his first PGA Tour win before matching Baird’s winless drought. Twice a runner-up, the 33-year-old is in position to do just that after a third-round 65, one that put him into a tie for third and one shot off the lead heading into the final round. The score was the lowest of the day and marked Stadler’s ninth score of 70 or better through his first 11 rounds of the 2013-14 season.

• Though still in the early stages of its existence, the McGladrey has not been especially kind to 54-hole leaders. Only Heath Slocum was able to convert a third-round lead into a win, doing so in 2010. Each of the past two editions saw come-from-behind victories, as Ben Crane rallied from five shots down to win in a playoff in 2011 after a final-round 63, while Tommy Gainey used a Sunday 60 to erase a seven-shot deficit a year ago.

• Having made significant additions to his frequent flyer accounts over the past month, Brian Gay appears no worse for wear despite a hectic schedule that has spanned two continents. Gay is making his third straight start in three different countries, having tied for 47th at the CIMB Classic in Malaysia two weeks ago and T-46 last week at the WGC-HSBC Champions in China. Among the leaders this week in strokes-gained putting, Gay is one shot off the lead heading into Sunday as he looks for his second title of the 2013 calendar year.

• Though he has eight people ahead of him on the leaderboard, Sea Island resident Matt Kuchar remains in position to contend for the title Sunday after yet another solid round on the Seaside Course. Kuchar’s 68 Saturday was his third such score this week, and the former Players champion has never carded an over-par round in this event, having finished T-25 here in 2010 and T-20 in 2011. 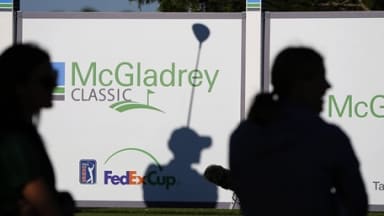 What has been known since its inception as the McGladrey Classic will now be known as the RSM Classic after the title sponsor changed its global brand name.

Austin Connelly rallied from seven strokes down on Sunday to win the Jones Cup Invitational at Ocean Forest in Sea Island, Ga., and earn an invitation into this fall’s McGladrey Classic.