Key facts for the Phoenix Open final round 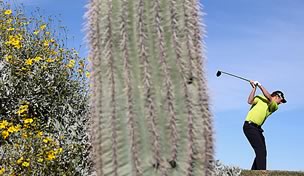 SCOTTSDALE, Ariz. – Here’s what to watch for in Sunday’s final round of the Waste Management Phoenix Open:

Like so many viewers at home, Spencer Levin turned off his television before Kyle Stanley finished the final hole at Torrey Pines last week, figuring the outcome was a given.

Stanley coughed up what was once a six-shot lead, then wound up losing in a playoff to Brandt Snedeker. Coincidentally, Levin enters the final round with a six-shot lead and, like Stanley, is seeking his first career PGA Tour win.

If he learned anything from Stanley’s foibles, Levin wasn’t dropping clues.

“If you can focus on yourself and just try to do the best you can,” he said, “that’s all you can really do.”

How will Levin fare when playing with the lead through 54 holes? Tough to tell, since he’s never been in this position on the PGA Tour – or anywhere else, really, that he can recall.

“I think maybe back on the Canadian Tour or a mini-tour,” he said. “I’m not sure about Nationwide. I don’t think so. Maybe a 36-hole lead on the Nationwide, but not 54-hole.”

That’s how many spectators the WMPO needs in order to surpass the largest attendance total ever, which was set in 2008 – the same year the Super Bowl was in town during the same week.

Through six days (including three practice/pro-am rounds), attendance has totaled 459,815, including a record-setting mark of 173,210 on Saturday.

On four previous occasions the Sunday figure has been at least 78,541, but it hasn’t happened since 2007.

Driving distance is often an overrated statistic, but never more so than in one instance on Saturday.

Late in the day, the large scoreboard adjacent to the par-4 17th hole boasted that the day’s longest drive there was hit by Ken Duke, who banged one 354 yards. Only problem? The hole was playing just 341. His ball wound up in the water, which could serve as a daunting hazard for the leaders come Sunday afternoon.

Tee times are moved up so the tournament may conclude prior to the Super Bowl.