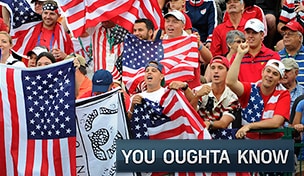 Getty Images
Derek Bohlen works on his swing while at the practice range for Big Break Greenbrier.  -

DUBLIN, Ohio – What you ought to know going into Sunday’s conclusion of the Presidents Cup:

• No team has lost the Presidents Cup when taking a lead into singles.

• Saturday’s resumption of the suspended foursomes matches will begin at 7:35 a.m. with Golf Channel coming on at 7 a.m. to carry coverage. Singles play is expected to begin at 9:10 a.m. with NBC airing the singles matches on tape delay from noon to 6 p.m.

• The Americans won both sessions of fourballs this week, claiming a 7-3-1 advantage in the best-ball format. It marks the first time in 17 years the Americans have won the overall fourballs in a Presidents Cup or Ryder Cup.

• Tiger Woods and Matt Kuchar are 3-0 as partners, the only perfect tandem this week, but they trail in their suspended foursomes match. They’re 2 down with nine holes to play.