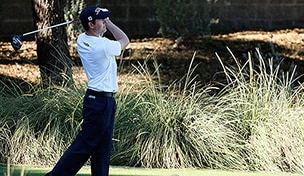 Following a Saturday 67, Webb Simpson has created some separation from the field in Las Vegas as he closes in on his fourth career PGA Tour title. Here's what You Oughta Know heading into the final round of the Shriners Hospitals for Children Open, where the former major winner holds a four-shot advantage:

• Though he's been a stalwart among the top ranks of the OWGR for more than a year, Simpson is still in search of his first victory since his breakthrough triumph at the 2012 U.S. Open. The former Wake Forest standout has carried his hot form into the new season, having carded a 63 to finish fourth at last month's Tour Championship in his most recent stroke-play start.

• While Simpson appears to have a commanding advantage, he has converted only one of four prior 54-hole leads into a victory, that win coming at the 2011 Wyndham Championship. Simpson most recently held the lead heading into Sunday at the 2012 Greenbrier Classic, where the dropped into a tie for seventh after a final-round 73.

• Simpson's playing partner in Sunday's final pairing will be Chesson Hadley, who moved into second place thanks to a third-round 67 and trails Simpson by four shots. While the 26-year-old may be somewhat unfamiliar to many golf fans, he has a proven pedigree: Hadley won twice this year on the Web.com Tour, including a triumph at the season-ending Web.com Tour Championship to secure his playing privileges on the PGA Tour for the 2013-14 season.

• Entering Sunday in a tie for fifth, Ryo Ishikawa hopes to capitalize better on his final-round opportunity than he did last week at CordeValle. The Japanese sensation was tied for seventh through 54 holes at the Frys.com Open last week, but struggled to a closing 72 to fade to a T-21 finish. Ishikawa now again finds himself in contention, albeit seven shot behind Simpson, as one of only seven players in this week's field to card 68 or better in each of the first three rounds.

• After briefly holding a share of the lead during the third round Saturday, it's clear that Jason Bohn feels comfortable in Las Vegas, and specifically at TPC Summerlin. Making his fifth start in this event, Bohn has never carded an over-par round – notching a trio of top-25 finishes in the process – a streak that he continued with Saturday's 2-under 69. At 13 under, he sits alone in fourth place, six shots behind Simpson, as he looks for his third career PGA Tour win.

• Any list of players 'comfortable' in Las Vegas must include Ryan Moore, a resident of the city, former UNLV standout and this week's defending champion. After a 2-under 69 Saturday, Moore sits in a large tie for fifth place at 12 under, seven shots off the pace. Should he rally to overtake Simpson, Moore would become the first player to successfully defend at this event since Jim Furyk went back-to-back in 1998-99.