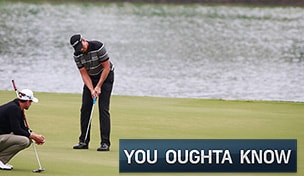 Staked to a four-shot lead, Henrik Stenson appears poised to finish his 2013 season with a win at the Tour Championship. Here's what You Oughta Know heading into the final round at East Lake Golf Club, as the Swede looks to leave Atlanta with a pair of trophies:

• Should Stenson go on to win Sunday, it would mean an $11.44 million payday. Stenson would receive $1.44 million for topping the 30-man field assembled this week at East Lake, as well as the $10 million top prize for claiming the season-long FedEx Cup title.

• A win Sunday would be Stenson's second of the FedEx Cup Playoffs, after he claimed the Deutsche Bank Championship earlier this month. He would become just the fifth player to win two playoff events in the same season, joining Tiger Woods (2007), Vijay Singh (2008), Camilo Villegas (2008) and Rory McIlroy (2012).

• Though Stenson appears in command of his game this week in Atlanta, a comeback would not be unprecedented. Seven times this year a player has come from at least four shots behind during the final round to win, most recently when Adam Scott overcame a six-shot deficit to win The Barclays.

• In a season filled with dramatic final-round comebacks, only 16 of 37 third-round leaders on the PGA Tour have gone on to win. The last player to convert a 54-hole lead into a victory was Patrick Reed, who survived a playoff with Jordan Spieth to claim the Wyndham Championship last month. This is the first time in Stenson's career that he has held a 54-hole lead on the PGA Tour.

• Stenson is in line to become the first European to win the season-long FedEx Cup title, and the first international player to win at East Lake since Villegas took home the title in 2008. He would also become just the fourth player to win this event in his first trip to East Lake, joining Chad Campbell (2003), Bart Bryant (2005) and Bill Haas (2011).

• The last man into this week's elite field, Dustin Johnson could potentially end his season with bookend victories should he find a way to overtake Stenson. A winner in the season's first event at Kapalua in January, Johnson could become just the third player in the FedEx Cup era to notch a top-10 finish as the No. 30 seed, joining John Senden (T-10, 2009) and Bo Van Pelt (ninth, 2011).

• Currently projected to finish 11th in the final FedEx Cup standings, Jordan Spieth is in good shape to notch the best-ever finish in the season-long standings by a PGA Tour rookie. Tied for fourth after three rounds, Spieth would surpass the record currently held by Brandt Snedeker (2007), Marc Leishman (2009) and Keegan Bradley (2011), who all finished 20th in the season-long points race.