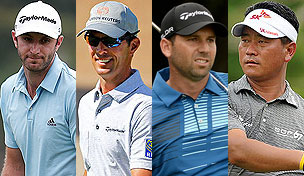 Getty Images
Adam Scott of Australia with the winners trophy after the final round of the PGA Grand Slam of Golf at Port Royal Golf Course on October 16, 2013 in Southampton, Bermuda. (Photo by Ross Kinnaird/Getty Images)  -

The final WGC event of the calendar year comes to a conclusion Sunday in Shanghai, as Dustin Johnson looks to maintain his momentum at Sheshan International Golf Club. Here's what You Oughta Know heading into the final round of the WGC-HSBC Champions, where Johnson has a three-shot lead:

• Johnson's third-round 66 came despite a pair of double bogeys, as the 29-year-old carded 10 birdies for the second consecutive day. It's a remarkable output considering that entering this week, Johnson had recorded 10 birdies in a round just once in his PGA Tour career, during an opening-round 64 en route to winning the 2010 AT&T Pebble Beach National Pro-Am.

• Should Johnson claim the trophy by day's end Sunday, it would be his eighth career PGA Tour win. That total would move him ahead of Retief Goosen and Geoff Ogilvy among active players and into a tie with Sergio Garcia, Mike Weir and K.J. Choi. Johnson, however, would have amassed his eight wins in far fewer PGA Tour starts (142) than Garcia (261), Weir (384) or Choi (353). In addition, three of Johnson's victories came in events that were shortened to 54 holes due to weather, the 2009 AT&T Pebble Beach National Pro-Am, the 2011 Barclays and most recently, the 2013 Hyundai Tournament of Champions.

• This marks the fourth time that Johnson has taken a 54-hole lead into the final round in his career, with his win at the AT&T Pebble Beach in 2010 serving as the only time he converted such an advantage into a victory. The other two instances came at the 2010 U.S. Open, when he tied for eighth, and at the 2011 WGC-Cadillac Championship, when he finished second.

• Players looking to chase down Johnson can look back at the event's recent history for some inspiration. Last year, Ian Poulter began the final round four shots off the pace but rallied to win by two shots; the year prior, Martin Kaymer won by three shots at Sheshan despite starting Sunday five shots off the lead.

• Beginning the final round in second place, Poulter will look to win back-to-back HSBC titles across two different courses, having triumphed last year at nearby Mission Hills. Should he accomplish the feat, he would join Tiger Woods as the only player to successfully defend a WGC title. Woods has accomplished the feat several times, most recently winning the WGC-Bridgestone Invitational for the third consecutive year in 2007.

• Tied for fourth after 54 holes, Graham DeLaet is making the most of his first start in a WGC event. Should the Canadian come from six shots off the pace to win Sunday in Shanghai, he would become just the second player to win in his WGC debut. The only other player to do so was Jeff Maggert, who won the first-ever WGC event at the 1999 WGC-Accenture Match Play Championship.

• Both entering the final round inside the top five, Graeme McDowell and Justin Rose have more than just Sunday's title in their sights. The duo currently sit second and third, respectively, in the season-long Race to Dubai, each trailing FedEx Cup champion Henrik Stenson by a sizeable margin. With the Swede currently tied for 58th, McDowell (currently third this week) and Rose (tied for fourth) both can put a dent in Stenson's season-long advantage with a high finish Sunday.

• Having led after the opening round, former world No. 1 Rory McIlroy put himself back into contention with a 5-under 67 Saturday. At 12 under, he's tied for fourth alongside Rose and DeLaet, six shots off the pace with one round to play. After notching five worldwide wins in 2012, McIlroy is still in search of his first victory of 2013 as he looks to claim what would also be his first career WGC title Sunday in China.