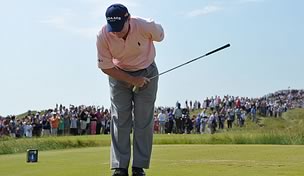 Lewis, a 20-year-old English amateur who was named after Watson, was a co-leader after shooting a first-round 65 at the Open Championship. Although he shot 74 Friday he stands at 1-under 139 and will easily make the cut and play the weekend.

“I think if you asked me two days ago I would have taken it,” Lewis said. “But at this moment it doesn’t feel so good.”

Watson, 61, only made news Thursday because he was paired with Lewis. Friday, he made bigger news when he aced the 178-yard sixth hole. His 4-iron shot bounced once on the green and jumped into the hole.

Watson shot 72-70 and is at 2-over 142, good enough to make his 24th cut in the Open Championship. Watson seems to be the only person not surprised by his success.

“I guess I refuse to be a ceremonial player,” Watson said. “When that time comes, then I’ll hang them up.”

Watson has provided several special memories just over the last two years alone. Two years ago at the Open Championship at Turnberry, then 59 years old, he led most of the way but fell to Stewart Cink in a playoff.  At the 2010 Masters, Watson shot a first-round 67 and was tied for second place. At the 2010 U.S. Open at Pebble Beach, Watson shot a first-round 78, but scrambled on Day 2 to shoot 71 and make the cut. He tied for 29th place.