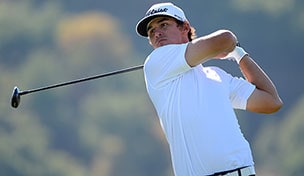 Brooks apparently isn’t the only Koepka who has some game.

Chase Koepka, a 19-year-old sophomore at the University of South Florida, won his second college event of the season Tuesday at the AutoTrader.com Classic in Duluth, Ga. He shot rounds of 68-69-69 at Berkeley Hills Country Club to finish at 10-under 206, two shots clear of two players.

Brooks Koepka, now 23, was a two-time ACC Player of the Year at Florida State. Unlike his younger brother, Brooks didn’t win his first event until the fall of his senior season, but clearly that hasn’t stopped him from making a name for himself on the pro circuit. He has won four times on the European Challenge Tour, and last week he was the 36- and 54-hole leader at the Frys.com Open, where he had a four-shot lead at one point Sunday. Koepka eventually made four bogeys in his last 10 holes, carded a final-round 72 and finished in a tie for third, enough to punch his ticket to Vegas.

Last year, during his freshman campaign, Chase Koepka had six top 10s in 10 starts, including a runner-up at the Big East Championship.