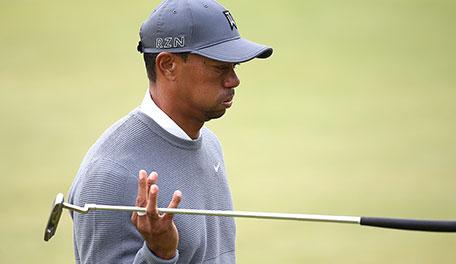 Tiger Woods is getting it from all angles these days.

Social media was buzzing after watching the 14-time major champ put the finishing touches on a career-worst 76 at St. Andrews, where he's won two Open Championships, but it was the American Association of Retired Persons who swooped in out of left field and fired the knockout zinger:

.@TigerWoods It's better to be over 50, than it is to be over par. #DisruptAging #TheOpen

Ouch. That one's got to sting.

The AARP zinger was likely triggered by a remark Woods made in his pre-tournament news confertence on Tuesday, when he was asked whether his recent struggles have led him to contemplate retirement.

“Retirement?” he said. “I don’t have any AARP card yet, so I’m a ways from that.

Woods, 39, who will be eligible for AARP membership when he turns 50, has yet to respond.