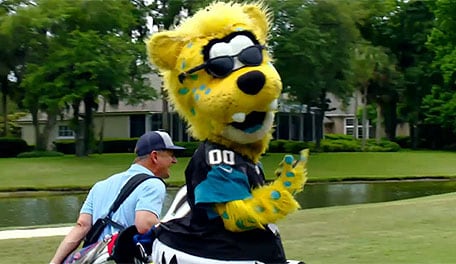 As one star rises, another rides off into the sunset.

In the same week that we watched Jordan Spieth win his second consecutive major championship, we say goodbye to Jacksonville Jaguars mascot, Jaxson DeVille, who has called it a career after 19 years.

DeVille, who's suited up for nearly 200 total games for the Jaguars, is arguably the greatest golfing mascot of all time. Who could forget earlier this year when he won a closest-to-the-pin contest at the famed 17th hole at TPC Sawgrass:

But despite all the BMX bike jumps and skydives into EverBank Field, DeVille has decided to hang up the cleats.

The man inside the giant cat suit, Curtis Dvorak, speaks:

“It’s time,” the 40-year-old told News 4 Jax. “(I’ve spent) 19 seasons in that building, jumping off those light towers. Even though I tell people I started when I was 10, I actually started when I got out of college. I eat a little too much Advil — more than I should — and I have some really cool opportunities here in town that I have been working on for a long time.”

As we wish Jaxson a happy retirement, let's take a look back at the time he took on our very own Matt Ginella in a 3-hole match on Morning Drive. (Spoiler alert: he won)