Franken-player is born on 'Frankenstein' anniversary 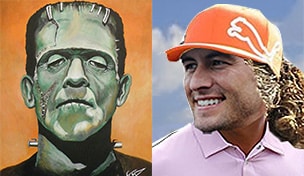 Getty Images
AUGUSTA, GEORGIA - APRIL 07: Honorary starter Arnold Palmer is introduced as Gary Player (R) looks on during the ceremonial tee off to start the first round of the 2016 Masters Tournament at Augusta National Golf Club on April 7, 2016 in Augusta, Georgia. (Photo by David Cannon/Getty Images)  -

On this day in 1818, Mary Wollstonecraft Shelley’s "Frankenstein" was published. The book is widely credited as the world's first science fiction novel and tells the tale of a scientist who creates a gentle, intellectually gifted yet enormous and physically hideous creature. If you haven't read it, where have you been for the last 196 years? Go read it, or at least go watch one of the many movie adaptations.

The anniversary got us in the Grill Room thinking however, what would professional golf's Frankenstein look like? After way too much debate and time spent on Photoshop, we came up with what you see below. As you can see we mixed some classics like Jack Nicklaus' signature putter raise with the new-school style of Rickie Fowler's flat brim. We also tried to hide the hideousness of this beast with Adam Scott's face. We're not sure if we succeeded.

So what do you think of our Franken-player? And who would be in yours? Let us know in the comments below.