D-Backs' Hill gets support from teammates at WMPO 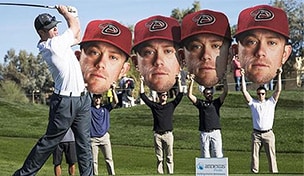 The Waste Management Phoenix Open is known for its crazy hijinks, and it got started early this year at the pro-am. While there were plenty of celebrities, none had a bigger (or more noticeable) following than Arizona Diamondbacks' second baseman Aaron Hill. When he stepped to the first tee he saw himself, and then he saw himself again and again and again. That's because his teammates, Charles Brewer, Eric Chavez, Josh Collmenter and Patrick Corbin, had shown up carrying Fatheads of their middle infielder.

They followed Hill around all day and even got his playing partner, Billy Horschel in on the act, letting him hit a drive through one of the Fatheads on the 18th hole.

Knowing how things usually go this week at TPC Scottsdale, the fun seems like it is just getting started.