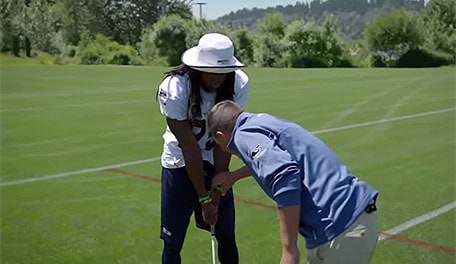 Jordan Spieth may have left the Pacific Northwest with the U.S. Open trophy, but another major champion, Jason Dufner, had himself quite a week as well. Not only did the former PGA champ finish T-18, but he got to visit a Seattle Seahawks practice.

And reason No. 4,378 why being a professional golfer is awesome, Duf Daddy didn't sit in the stands and watch the defending Super Bowl runner-ups from a distance; he walked right on the field and interacted with the players and coaches, all while a television crew filmed his every move.

Dufner even got to open his mouth about the best, helping cornerback Richard Sherman fix his slice with one simple tip.