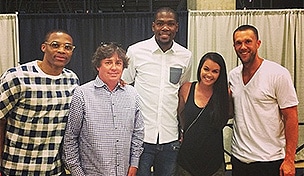 Getty Images
TAIPEI, TAIWAN - OCTOBER 19: Sei Young Kim of South Korea hits a shot out of the bunker on the 18th hole during day one of Swinging Skirts LPGA Taiwan Championship on October 19, 2017 in Taipei, Taiwan. (Photo by Power Sport Images/Getty Images)
-

If the Oklahoma City Thunder's playoff run comes to an early end, it appears Kevin Durant will have his choice of swing coaches to help him with his golf game this offseason.

After handing his game-worn shoes to Bubba Watson moments after a series-clinching win over the Los Angeles Clippers, Durant has been seen this week posing for pictures with the Dufners. The one below was uploaded to Amanda's Instagram account.

A quick look at Jason's Twitter timeline shows that he's been a pretty vocal supporter of this year's NBA MVP, even sporting his kicks, calling them "the flyest shoes out." So it's not a big surprise that the Dufners are in San Antonio this week rooting on the Thunder as they take on the Spurs in the Western Conference Finals. Hey, Durant could do worse for a golf coach - looking at you LeBron.

And just for fun, walking picnic blanket Russell Westbrook got in the picture as well. Not sure if he'd want to get in on the golf though, the goal of the game is to take less shots, not exactly his strong suit. 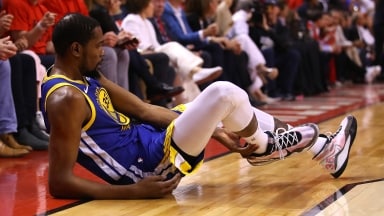 Woods feels for NBA star Durant after injury: 'It was sad' 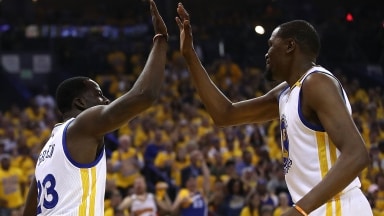 Nothing to do in Utah? Think again. A couple of stars on the Golden State Warriors found some nightly fun recently with Top Golf. 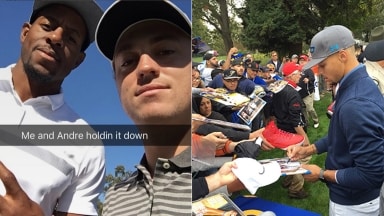 Watch: Curry, Iguodala tee it up in pro-am

Golden State Warriors teammates Stephen Curry and Andre Iguodala weren't about to let a Tiger Woods withdrawal get in the way of their day on the links.