View from the top: Euros tweet after Ryder Cup win 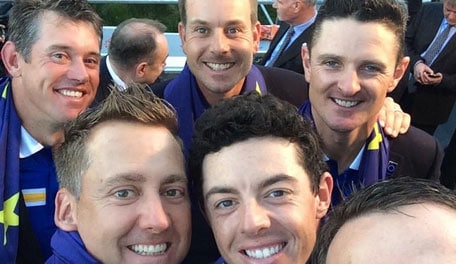 After Europe won the 40th Ryder Cup, they took to social media to post celebratory images.

Europe, we did it!!!!! The boys played amazing to win the 2014 Ryder Cup! pic.twitter.com/XhmLSajj7t

Wow what a view. pic.twitter.com/v1poFKZ1bw

And Rory captioned this: "@rydercupteameurope #winners"

Been a good day! Just had a lift home from the police! pic.twitter.com/ryw5vsu7hD

What a week, thanks to all the fans out there, awesome week #RyderCup2014 #europeantour #GoEurope pic.twitter.com/JAkCgJOBcE

Ian Poulter captioned this photo, "Party is just getting started."