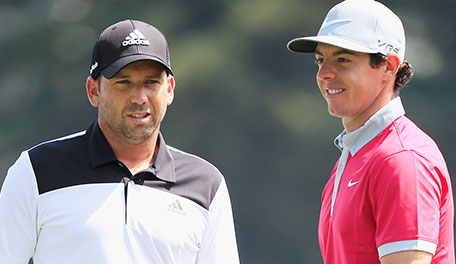 What do PGA Tour pros talk about during the (roughly) 5 hours they spend together playing a round? Myriad topics, undoubtedly, though one can never be certain what all transpires.

And while the Grill Room can't be certain what playing partners Rory McIlroy and Sergio Garcia were talking about while hanging out on a tee box Saturday during the third round of the BMW Championship, this video below - posted to Twitter by Adam Sarson - at least gives us an idea of one conversation the two had.

It appears McIlroy and Garcia were poking fun at McIlroy's former fiancé Caroline Wozniacki, when she got her hair caught in her tennis racket during the middle of a point at the U.S. Open.

Watch the video below and decide for yourself:

Are Rory and Sergio making fun of Caroline Wozniacki here? (h/t to @Kevin_Igo for the idea) http://t.co/IEpMcBJQbD