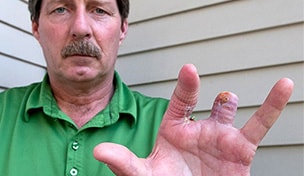 Next time you think you couldn't possibly have a worse round, just count your fingers. If you are leaving the course with as many as you showed up with, then you had a better day then Edward Lunger.

According to a report in the New York Post, the 50-year-old Long Island man vacationing in Mexico lost two fingers in a fight with a crocodile at the Cancun Golf Club on July 1, and now is suing the course.

Lunger, a 15 handicap, says he hooked his ball left of the fairway into the sand, and after he chipped out, an angry female crocodile attacked him, chomping down on his left arm and pulling him to the ground.

“She pulled me back and flipped me, and I went to the ground,” he said.

One of Lunger's golf buddies grabbed a nearby boulder and smashed the crocodile on the head, helping to set him free.

He lost his middle finger and most of his ring finger in the attack.

“I’m thinking my whole hand is off,” Lunger recalled. “I couldn’t feel my hand. It was like my whole body was on fire.”

Lunger was rushed to the hospital but forced to pay the $17,800 bill up front before he could get treatment. The men split the tab on their credit cards.

Lunger has filed a $2.25 million suit in Brooklyn federal court alleging that Lunger says there were no warnings of raging reptiles and that crocodiles were introduced to the golf course “as a marketing tourist attraction and hence profit- enhancing lure.”

As if the situation couldn't get any worse, reps from the course began pressuring Lunger to sign papers absolving the resort of responsibility. When he refused, they allegedly spread rumors that he prompted the attack by teasing the crocodile with chicken.

“We came with nothing,” said Lunger's friend Mark Martin. “We rented the clubs there. We [bought] the balls there. Where would we be getting chicken?”