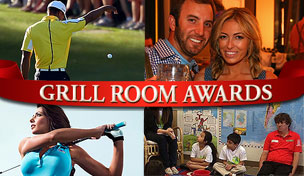 The 2013 PGA Tour season is officially in the books, and the Grill Room gang took this opportunity to look back on the first nine months of the year.

From Tiger Woods' five wins to his verbal sparring with Sergio Garcia ... from Jason Dufner's masterful use of Twitter to his classic celebration at the PGA Championship ... from Jungle Bird to supermodels and everything in between ... this season was ripe with unusual storylines that may not be officially recognized by the Tour, but the Grill Room will never forget.

Sit back, relax and enjoy this year's Grill Room awards gallery. Each category has two nominees, and as for the winner? We'll let you decide.