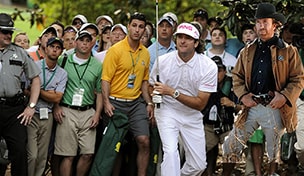 Getty Images
Charley Hull of England plays her tee shot at the par 3, fifth hole during the first round of the 2016 ANA Inspiration at Mission Hills Country Club on March 31, 2016 in Rancho Mirage, California. (Photo by David Cannon/Getty Images)  -

When it comes to the race for "World's Greatest Human Being," it has long been established that we are all playing for second. Chuck Norris had it wrapped up the day he was concieved, March 10, 1940. Some well-known facts about today's birthday boy include:

• Chuck Norris has already been to Mars; that's why there are no signs of life.

• Some magicians can walk on water, Chuck Norris can swim through land.

But did you also know that he is one of professional golf's ultimate connoisseur? The Grill Room took a look back at some of the greatest moments in golf history, and wouldn't you know it, the man who can slam a revolving door was there for all of them. So celebrate Chuck Norris' 74th birthday with us by taking a walk down memory lane here, or by clicking on the image below.