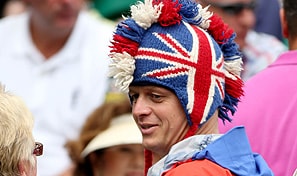 It's hard to remember the 2012 U.S. Open Championship without the surprise (and brief) appearance of Jungle Bird squawking in front of the camera during Webb Simpson's trophy presentation. Earlier this week, we revisited the impromptu performance from Andrew Dudley, an environmental activist who simply wanted to bring some attention to 'stopping deforestation.'

It led many to wonder if we would be seeing Jungle Bird at this year's trophy ceremony, but alas, the 113th U.S. Open has come and gone with no sight of him. Justin Rose was given the trophy, made a speech and celebrated with his wife without interruptions of bird sounds or arrests. So what gives?

According to a post on Deadspin, Jungle Bird was banned from the grounds at Merion this week. A letter addressed to Dudley from the USGA and Merion Golf Club said that 'any attempt to enter the Championship grounds will result in arrest and prosecution.' You can view the full letter below.

It seems the USGA may have won this battle, but keep your eyes peeled. You never know where Jungle Bird could strike next.