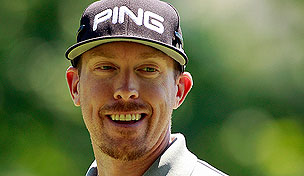 In a blowout, baseball announcers need something to talk about, right?

So it was Wednesday night that Hunter Mahan managed to get involved in the broadcast during Game 4 of the Boston Red Sox-Detroit Tigers series.

If players are so upset at Puig celebrating a triple or clutch hits then get him out. I'm tired of hearing about baseball's unwritten rules

McCarver, the 72-year-old veteran analyst who is retiring after this season (to the delight of many baseball fans), rattled off a few of golf’s unwritten rules, like pros not being allowed to wear shorts in 110-degree heat … until play-by-play man Joe Buck told McCarver, no, that actually is a written rule.

Unfazed, McCarver proceeded to list other unwritten rules, like talking anytime your opponent is hitting, and driving into the foursomes in front of you, and stepping in an opponent’s line.

Those aren’t unwritten rules. Those are easy ways to start an on-course royal rumble.

@TimMcCarver @timmccarvershow would love the opportunity to defend myself. This is a perfect debatable issue if interested. #BringItOn