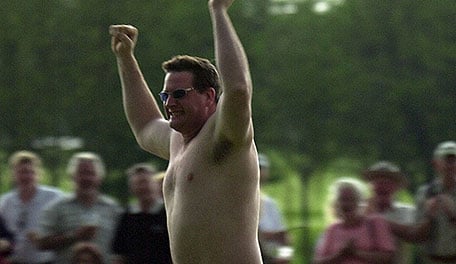 Dress code violations turning into a far bigger deal than they need to be is nothing new to golf.

It doesn't matter if you're the president, chairman and CEO of Levi Strauss or Michael Jordan. Rules are rules. But this story from CBS Boston may take the cake.

According to police, 55-year-old Robert Ide stripped down to his birthday suit on Monday and started hitting golf balls in a softball field near the St. John Paul School in Hyannis, Mass.

Witnesses reported the incident and took video on their cell phones. Ide was eventually taken into custody and charged with open and gross lewdness and total shocker ... intoxication.