The mane event: One-on-one with @BrandelsHair 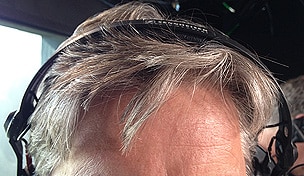 Getty Images
Patrons watch the play around the second and seventh greens during the second round of the 2015 Masters Tournament at Augusta National Golf Club on April 10, 2015 in Augusta, Georgia. (Photo by Andrew Redington/Getty Images)  -

SCOTTSDALE, Ariz. - The Grill Room is on-site at this week’s Waste Management Phoenix Open, and our correspondent was granted an exclusive, one-on-one interview with local celebrity @BrandelsHair, who has called Scottsdale home for the past 30 years. Catch him on top of Golf Channel analyst Brandel Chamblee’s head in the broadcast booth all week from TPC Scottsdale, or if you’re in the area, come out and say hello.

Brandel's Hair: All I can say is in the third grade, girls used to chase me and fight over who could run their fingers through me. As Brandel’s gotten older, he's learned to run slower.

GR: A lot of people think Brandel colors you. What do you say to that?

BH: I'm a big believer in playing the hand you're dealt. I just happened to have been dealt a royal flush.

GR: What color are you?

GR: What products do you use?

BH: Who are you writing for, In Style? Is this going to be one of those "Who Wore It Better?" deals? Listen, I've got to maintain some mystery here. Let's just say I use shampoo and conditioner. When they start paying me to use them, I'll give them some props.

GR: What about mousse?

GR: You know what I mean. Are you going to be serious?

BH: You're interviewing hair. You shouldn't be surprised if I occasionally bristle.

GR: You know, you're being very difficult to deal with.

GR: Do you have a regular stylist?

BH: I don't know if he's regular or not - I've never asked him. That's a little personal, isn't it?

GR: No, is there someone you go to, uh, regularly?

BH: Nah, this crazy guy will go to anybody.

GR: What's a bad hair day for you?

BH: When Brandel doesn't go out. If you got it, you gotta flaunt it, right?

GR: Who's your favorite golfer?

BH: Brandel likes natural swings, and I'm a fan of no dyes, plugs or wigs, but the alabaster dome needs some sun time.

BH: He's going for Rod Stewart, which at least is better than going for Patrick Stewart (and let's face it, Stewart Cink is all over that look). He's got the clothes, but the hair doesn't quite cut it. Talk to me when it gets its own Twitter handle.

BH: Ponytails on men are just wrong. See Steven Seagal. But he's the exception to the rule. It's like Jim Furyk's golf swing. It's all wrong, but it works.

GR: Among the people Brandel works with, who has the best hair besides you?

BH: People always ask me if Holly Sonders' hair is real. Real or fake, I say who cares?! And Frank Nobilo never wore a hat when he played golf and why would he? That's one terrific head of hair. Sometimes, when I look at it, I feel like Ben Hogan watching Sam Snead swing a golf club.

GR: If you could be anybody else's hair, who's would you be?

GR: Who's the better half, you or Brandel?

BH: Me. I have no idea what's coming out of that guy's mouth. I'm so close to his brain but I can't control it.

BH: That he'll start playing, play well and get a hat deal. But I've seen him hit it recently and I think I'm safe.

GR: Who’s the most famous person to touch you?

BH: Christophe. He said I was fabulous.

GR: How have you handled fame?

BH: I look at it this way: When you're on top, just enjoy the view.

GR: Have you ever been blamed for a bad shot?

BH: When he used to play golf I got in his eyes a few times on critical shots, and I felt bad about it. But we did look good.

GR: Do you ever feel taken for granted?

BH: No, I can tell by the look in Brandel's eyes every morning that he truly loves me.

GR: Which have you enjoyed more - golf or the broadcast booth?

GR: People say you’re the best hair on TV. Do you agree with that?

A big thanks to @BrandelsHair for taking time out of his busy schedule. Remember to catch him all week live from the Waste Management Phoenix Open.