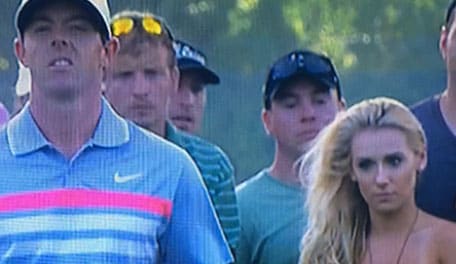 Before you say anything, yes, it is a slow news day. But we've been looking for a reason to post this and Rory McIlroy has answered our prayers. You should thank him. Below is a Vine of the No. 1 golfer in the world, walking away after hitting his tee shot on the 15th hole at the WGC-Bridgestone at couple of weeks ago. Normally he would be the star of this clip, but the cute blonde getting his attention with the tried-and-true hair tussle steals the show - as of this writing, it has been looped over 1.6 million times.

But all she was at the time was just that, a good-looking golf fan who managed to get herself on TV. Now there's so much more to the story. Now we know she is Ashley Bongiovanni, a model from Ohio, who just so happens to be followed on Twitter by a certain golfer that has won his last three tournaments. Two of them majors.

Thanks to the guys over at NoLayingUp.com, who scored an exclusive interview with the self-described singer, model, cook and event hostess, we now know everything we've ever wanted to know about Ashley, such as Rory actually smiled at her when he walked over, she thinks he is a really good player and that if he reached out, she would "enjoy his company."

What does this all mean? Probably nothing, except for adding another reason to your list of "reasons to be jealous of Rory McIlroy," which currently stands at 1 million.

UPDATED: It appears McIlroy doesn't like the media meddling in his personal life. Much like how he changed his iPhone passcode after it was compromised on national TV at the PGA Championship, he has unfollowed Miss Bongiovanni on Twitter within hours of this post. So the screenshot below will live on in infamy.