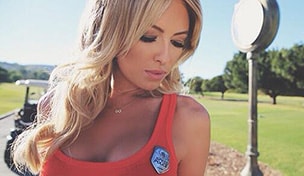 It's not every day that a golf commercial is produced without featuring a single professional golfer, but then again most commercials don't include a cameo from Paulina Gretzky.

While introducing their new "Speed Police" campaign that promises to combat "slow and outdated" equipment, the folks at TaylorMade created just such a combination, airing a 30-second ad that doesn't include the likeness of any of the well-known PGA Tour players in the TMaG stable. Instead, the video pauses halfway through to feature a scantily-clad Gretzky, decked out in Adidas gear and playfully blowing a kiss to the camera.

Gretzky's tie to TaylorMade is through her fiance Dustin Johnson, who has used TaylorMade equipment on Tour for several years. While he has not teed it up since a T-6 finish earlier this month at Kapalua, Johnson tweeted Wednesday that he plans to be in the field at next week's AT&T Pebble Beach National Pro-Am, where he has won twice before.

Watch the full video below: