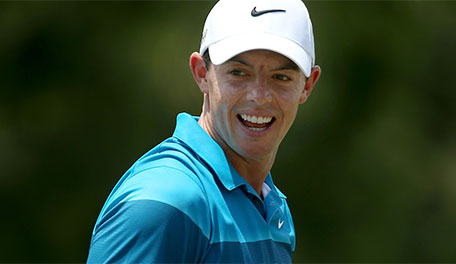 Fox Business Network’s Lisa “Kennedy” Montgomery has fessed up to be being the off-camera voice that was heard calling Rory McIlroy a "leprechaun," and from the sounds of her non-apology apology, she'd do it again.

“Yesterday at this time I used the word leprechaun to describe golfer Rory McIlroy. I love sports, I love golf, but I am not a fan of Rory’s. Mostly for the way he treated tennis great Caroline Wozniacki and discarded her like a piece of chewed gum when he broke her heart and broke off their engagement in a short phone conversation. That’s worse than breaking up on a Post-it. Now to be clear, neither Harris nor Jenna Lee used the term and I don’t want them to get the credit for it. I called Rory McIlroy a leprechaun and believe me I wanted to call him much worse.  As you know, some of my best friends are leprechauns and they also have tremendous senses of humor. Thank you.”

Check out video below of the statement delivered on the air Tuesday:

So now you know. Montgomery isn't jumping off the Wozniacki bandwagon anytime soon, and she has friends that are leprechauns. Once again, thanks for clearing that up.

As news trickled out Monday about Rory McIlroy rupturing a ligament in his left ankle, which cast doubt on him defending his Open Championshipt title, news outlets everywhere offered their take. They ranged from "this is a tough loss for golf" to ... "he's a leprechaun, I can't stand him." Wait, what?

You read that correctly. During the Monday edition of Fox News' "Outnumbered," anchor Harris Faulkner gave an update on McIlroy's injury that occured during a pick-up soccer game over the weekend and one of the off-camera hosts decided it was the perfect time to let the world know her feelings on the Northern Irishman.

Glad she cleared that up.