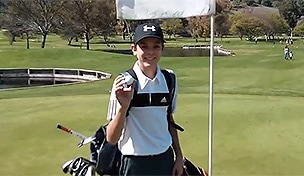 Cale McLellan, teenage son of San Jose Sharks head coach Todd McClellan, made back-to-back aces this past weekend at a junior tournament in the Bay Area. Unfortunately for us, the cameraman didn't manage to get the shots on film, but we do get a nice interview with a seemingly stunned McLellan just moments after his second shot found the bottom of the cup.

The odds on making consecutive holes-in-one are estimated at a staggering 50 million to 1. In other words – start playing the lottery when you turn 18, Cale.

The best part of the video, besides McLellan leaving his buddy hanging worse than Tom Brady, is that he doesn't even remember where he put the ball from his first ace. Who does this kid think he is, Louis Oosthuizen at the 2012 Masters?

The 14-year-old pulled off the amazing feat in a junior golf club tournament on the 84-yard eighth hole and 116-yard ninth at the Santa Teresa Golf Club's short course in San Jose. McLellan ended up finishing third overall, but somehow we get the feeling that he'll always remember this tournament for a different reason.