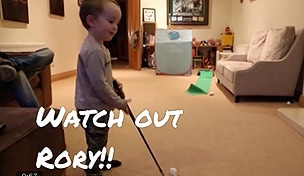 Getty Images
KIAWAH ISLAND, SC - AUGUST 08: Webb Simpson of the United States speaks during a press conference during a practice round of the 94th PGA Championship at the Ocean Course on August 8, 2012 in Kiawah Island, South Carolina. (Photo by David Cannon/Getty Images)  -

Earlier this year, a Nike advertisement told us no cup was safe from Tiger Woods or Rory McIlroy.

At 37 and 24, respectively, we would expect two of the game's biggest stars to have honed their craft by now. But what should we expect from 3-year-old Michael Patton of Dublin, Ireland? Apparently, more of the same.

The video below shows Michael hitting plastic balls in what appears to be a clothes hamper, time after time knocking it in the hole, much like his favorite golfer (McIlroy) does in the Nike commercial.

Move over, McIlroy, there's a new kid in town.