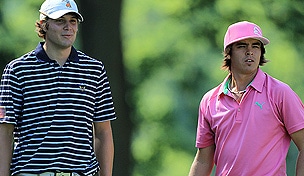 According to his Instagram account, Rickie Fowler spent the weekend practicing with Butch Harmon and former Oklahoma State University teammate Peter Uihlein. But it wasn't all business, because Fowler posted this video of he and Uihlein hitting what he called "super flops" over a 25-foot net.

It's uncertain where they drew inspiration for the super flops, but both pros cleared the net from just two paces back. Perhaps they had recently watched Phil Mickelson hit this flop shot over Roger Cleveland.