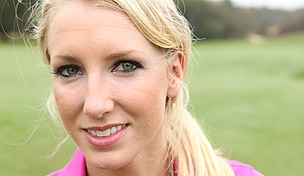 Getty Images
PEBBLE BEACH, CA - FEBRUARY 11: Huey Lewis plays a shot from the bunker on the third hole during the first round of the AT&T Pebble Beach National Pro-Am at the Spyglass Hill Golf Course on on February 11, 2016 in Pebble Beach, California. (Photo by Sean M. Haffey/Getty Images)  -

It's National Pancake Day and the Grill Room sat down for an exclusive, one-on-one with Brooke Pancake to talk all things, well, pancakes. Check out the Q&A in its entirety below, and for photos of pancakes (the girl and the food), click here.

Brooke Pancake: I would probably say my biggest go-to would be some southern-cooking, biscuits and gravy and sausage. Total southern girl. But if I’m gonna go all-out, that’s my sucker. I’ve met some people who are like, 'No, I’m not a big fan of biscuits and gravy,' and I’m like ‘What?!’

GR: Do you have a special pancake recipe?

BP: No. My mom makes phenomenal pancakes. I’m always really biased toward hers and I’ll have to get her little special touch. Anytime I’ve ever cooked pancakes, I’ve followed the directions on the box.

GR: Was cooking pancakes on the weekend a special tradition for your family growing up?

BP: We actually did cook pancakes a lot. I would make my mom make biscuits and gravy a lot, but yes, when we had people over, we would try to make pancakes for kind of the kicks and giggles of it. For my now-husband’s birthday, we were engaged last year and for breakfast we made him this huge mega-pancake and put candles on it and that was his birthday cake. We try to kind of sneak in some fun things.

BP: Aunt Jemima’s pretty good. Buttermilk’s pretty good. Anything that’s just a maple syrup with all the sugar and everything bad for you is just amazing.

GR: Do you put butter on your pancakes?

GR: Do you do anything special for National Pancake Day?

BP: (Coming to Morning Drive) is pretty much as special as it gets. I really enjoy a lot of the liveliness and all the attention you get on social media and all the jokes. I would love for it to be like another birthday for me so I can get some presents, but no, I don’t think I can top (being on Morning Drive).

GR: Do you feel more special on National Pancake Day than, say, on your birthday?

GR: Can you ever recall a time you ate pancakes for breakfast and then played a phenomenal round?

BP: No, I don’t think so. I have a horrible sweet tooth and it kind of gets me, but when I’m at tournaments I try to eat pretty good.

GR: Do you ever eat at Waffle House?

BP: All the time. My mom loves Waffle House. She has her order down-pat. Eggs over-easy with white toast, hasbrowns, scattered, covered, smothered, extra crispy, gets a diet coke. I mean, I know it like it’s my job. I tried reaching out to either an IHOP or Waffle House sponsor would be hilarious, so I was kind of hoping for either. Hopefully one day.

GR: Thank you so much and good luck with the rest of your season.