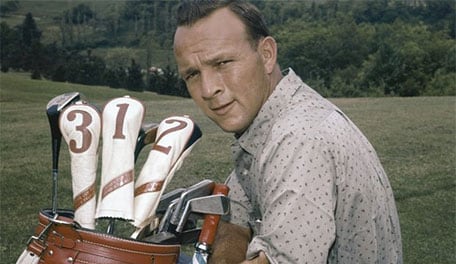 The King turned 85 on September 10, in case you hadn't heard. Players took to Twitter and Instagram to wish The King a very happy birthday. Here is a collection of the well-wishes from players, media and others in the golf world:

Happy 85th birthday Mr Palmer! A man responsible for transforming our sport and continues to do so today

Happy 85th to the King, Arnold Palmer. On and off the course you are an inspiration!

Happy 85th birthday to one of the all-time greats of the game, Arnold Palmer. #theking pic.twitter.com/5Zz6vTn9ES

Happy Birthday to my Golf Idol! Thanks for all you have done for the game of golf. I feel very fortunate to know you! #85 #TheKing #API

Happy Birthday Mr. Palmer! Looking forward to seeing you next year at the @APinv.

Happy birthday Arnold Palmer. Here's to living every day like it's your birthday! #theking pic.twitter.com/SVALgXKkue

Love this pic of the King in the locker room at Old Palm. pic.twitter.com/vnqBRue8XO

In honor of The King's 85th birthday, we present a few of his countless ad spots over the years from the IMG vaults pic.twitter.com/9SUDf4QUq6

From the IMG Vault: Arnie for Penzoil "I'm a guy who believes in taking care of the old equipment" #TheKing pic.twitter.com/rd9g4Ktdbk

From the IMG Vault: A nice play on words from Arneson Pool Sweep circa 1980 #TheKing @darrenrovell pic.twitter.com/gMDbXk6A8b

Happy 85th Birthday to Arnold Palmer. He made the game what it is today! #theking