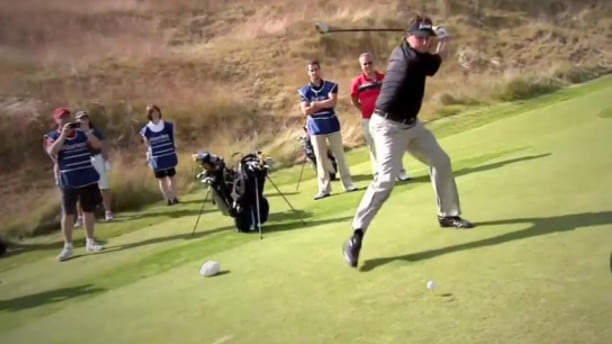 We've all been there at some point. Standing on the range or on an empty tee box late in the day, unable to resist the temptation to emulate the long driving style made famous in the movie 'Happy Gilmore.'

Remarkably, several players in this week's field at the Scottish Open opted to give the shot a try (on film, no less!), hitting the ball while moving toward the target as Adam Sandler's character did in the golf-themed flick. While Irishmen Padraig Harrington and Shane Lowry showed impressive form – perhaps they've both tried the shot a time or two before? – Phil Mickelson was the star of the European Tour video for his effort with a right-handed club that, predictably, was less than successful.

See the full video below, and marvel at among other things Lefty's willingness to play along: