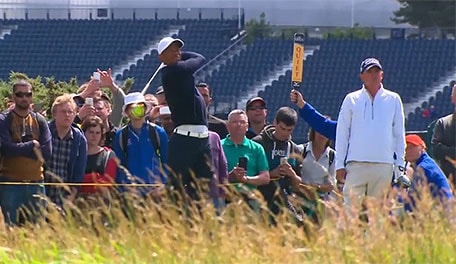 If Tiger Woods and Jason Dufner have a problem with each other, they're doing a pretty good job of hiding it.

Less than two weeks after tabloids reported that Tiger and Dufner's ex-wife Amanda had been dating “for months,” and that Woods even flew her to Seattle when he was preparing for the U.S. Open at Chambers Bay, the golfers were spotted playing a practice round at St. Andrews on Sunday.

Woods’ manager, Mark Steinberg, categorically denied the story in an email to GolfChannel.com at the time, saying: “The report is categorically false. Absolutely zero truth to that ridiculous rumor.”

As you can see in the video below, Woods has been at St. Andrews all weekend, getting in some prep work with prominent young junior golfers from the area on Saturday before playing the Old Course with the 2013 PGA champion and former Ryder Cup teammate on Sunday.