Report: Gretzky tells DJ to clean up before wedding 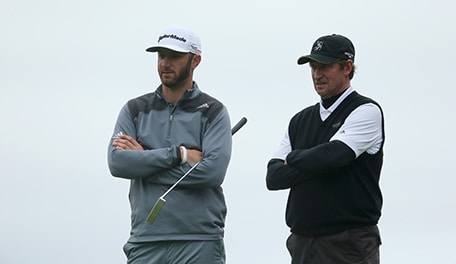 Welcome to the latest chapter in the ongoing saga of Dustin Johnson. (You can probably expect many more of these.)

Just one day after Golf Channel Insider Tim Rosaforte reported that Johnson was playing golf and hanging with the Gretzky family in Northern Idaho, Fox News' 411 blog suggests that things weren't always so copacetic between Johnson and his fiancé Paulina's dad.

It sounds like Wayne Gretzky had some stern words with his future son-in-law, Dustin Johnson, long before revelations of his hard-partying ways hit the press.

Sources tell FOX411 that the hockey great previously talked to Johnson – who is engaged to his 25-year-old model daughter, Paulina – cautioning him to clean up his act, or the wedding was off. We’re told that the family was aware of his penchant for partying, and that Wayne sought to be a positive influence, and offer help.

Johnson and Gretzky started dating in 2012 and got engaged in August 2013. In January, it was announced that the two were planning a Fall 2014 wedding, but in May, Gretzky told Golf Digest that they had postponed the ceremony, citing Johnson’s busy schedule.

Representatives for Wayne and Paulina Gretzky did not respond to comment requests.

One other note of interest from Fox is the claim, according to "an insider connected to the sport," that Johnson has had drug problems "for a while" and the PGA Tour has "always tried to keep it on the low."

Johnson missed time in 2012 with what he claimed was a back injury and what has otherwise been reported as a drug suspension from the Tour.

This has been Today in Dustin Johnson. Tune in tomorrow as he and Wayne shoot a net 54 in a member-guest better ball (baseless speculation).