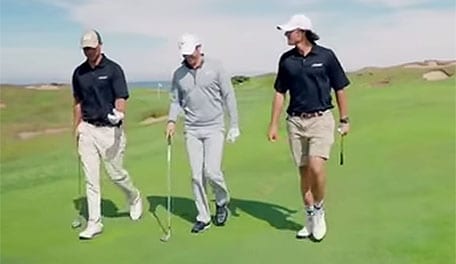 Rory McIlroy's status for the PGA Championship remains up in the air as he deals with an ankle injury, but if the world No. 1 can tee it up, he may have an advantage ... if a trick-shot competition breaks out.

McIlroy teamed up with everyone's favorite trick-shot artists, the Bryan Bros, earlier this year to take on Whistling Straits, and let's just say if the Bryans ever consider adding a third Bro to their squad, they could do worse than the Northern Irishman.

He nails their patented bank shot off the stones on the first take, smashes a couple drives out of mid-air like he's been doing it for years and even manages not to kill anyone with a Mickelsonian flop shot over George's head. Watch for yourself below: