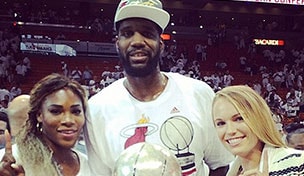 Getty Images
PALM HARBOR, FL - MARCH 08: Padraig Harrington of Ireland reacts after a putt on the first hole during the first round of the Valspar Championship at Innisbrook Resort Copperhead Course on March 8, 2018 in Palm Harbor, Florida. (Photo by Michael Reaves/Getty Images)
-

If breaking up with Rory McIlroy and losing in the first round of the French Open has Caroline Wozniacki down in the dumps, she's got a hell of a poker face.

Wozniacki and new best bud Serena Williams (who was also treated to an early exit at the French Open) were living it up in Miami this weekend.

The fun started Friday night, where the duo caught the Miami Heat's Eastern Conference Finals series clincher against the Indian Pacers, and like any normal fans they celebrated on the court with the trophy and a (slightly confused?) Greg Oden.

The fun continued after the game, where "DJ Caro" spun some hot beats at a South Beach nightclub.

What's next for Wozniacki? Who knows. But I think the moral of the story here is, if you're going through a tough breakup, be best friends with Serena Williams. 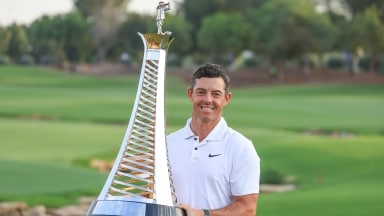