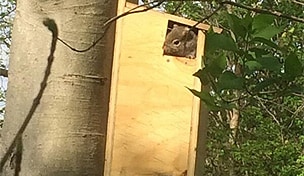 Getty Images
CHARLOTTE, NC - AUGUST 12: Dustin Johnson of the United States plays his shot from the sixth tee during the third round of the 2017 PGA Championship at Quail Hollow Club on August 12, 2017 in Charlotte, North Carolina. (Photo by Scott Halleran/PGA of America via Getty Images)  -

Phil Mickelson, Rory McIlroy, Bubba Watson and Adam Scott are among some of the biggest names who have already committed to playing the Memorial Tournament later this month in Dublin, Ohio. But what if I told you none of those guys are the event's biggest draw?

If the event sees a spike in ticket sales over the coming weeks, it will likely be because the most famous and revered squirrel in golf has made his return to the wild.

In a tweet Thursday, the Memorial Tournament confirmed that Sammy the squirrel has indeed returned home to Muirfield Village Golf Club.

U.S. Team mascot (@PresidentsCup) & @Love3d friend, Sammy the squirrel was released back into the wild at Muirfield. pic.twitter.com/RGkVVGe35Y

Sammy burst onto the golf scene at last year's Presidents Cup, when U.S. captain Davis Love III rescued a baby squirrel on Thursday and toted it around the course. Steve Stricker's wife, Nicki, named the squirrel Sammy because nobody was sure if the squirrel was a boy or a girl. Sammy became the team's mascot and lucky charm; all three matches Love followed with Sammy in tow on that Thursday were won by the Americans.

Love attempted to reunite Sammy with his mother, but the squirrel was taken to Ohio Wildlife Center for assistance when the mother could not be found.

According to a report, Sammy has taken up residence between the ninth and tenth holes - prime real estate as far as I'm concerned. Sammy's Twitter account, however, has remained mute on the return to Muirfield Village; Sammy hasn't tweeted since November. Perhaps he wanted to tell his friends - yah know, like Tiger Woods and Lindsey Vonn - first.

To revisit Sammy hanging out with Love, Woods, Vonn and more at the 2013 Presidents Cup, click here.