We ain't Lion: Detroit woos Tate with promise of golf 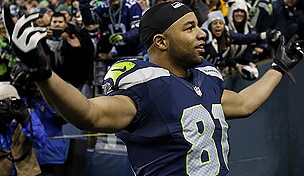 Getty Images
PONTE VEDRA BEACH, FL - MAY 12: Sergio Garcia of Spain plays his tee shot on the 17th hole during the first round of THE PLAYERS Championship on THE PLAYERS Stadium Course at TPC Sawgrass on May 12, 2016. (Photo by Stan Badz/PGA TOUR)  -

When looking to relocate for a job, there are many factors to take into consideration. Cost of living, climate, education system and - if you're NFL wide receiver Golden Tate - the number of golf courses in the area.

Tate, the leading receiver for the Super Bowl winning Seattle Seahawks, was wooed to the Detroit Lions with the promises of a passing-oriented offense, a five-year $31 million contract and a TPC within mere miles of the Lions' practice facility.

"He [Lions vice chairman Bill Ford] just said at one point that Michigan has the most golf courses, or something like that, in the United States," Tate told Detroit Free Press columnist Carlos Monarrez. "I forgot what the stat was, but that played a huge role in my decision to come to Detroit."

The stat Tate was likely referring to is that Michigan has more golf courses per capita than any other state. And now Tate, with an estimated 16.5 handicap, will attempt to tame them all.

Tate said that Ford told him that the TPC Michigan was "right across the street, which we have one of those in Seattle and it's my favorite course to play in Seattle. I can only imagine the course in Detroit is going to be in pretty good shape when the weather permits."

The TPC Michigan in Dearborn he's referring to is roughly five miles and a seven minute drive from the Lions’ Allen Park practice facility.

Sounds like the Detroit Lions gave Tate an offer he couldn't refuse.