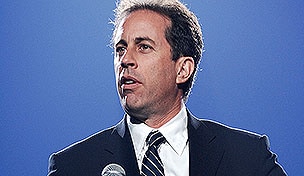 Jerry Seinfeld is a man who needs no introduction. Since the end of his regular television gig, he spends his time doing things that come with the territory of co-creating one of the greatest sitcoms of all time – things like collecting really expensive cars.

He also occasionally still tells jokes. They're still funny. One of those times came Tuesday on 'Late Night with Jimmy Fallon,' during which he dabbles into the world of golf with his all-too-familiar observational humor that seemingly will never get old.