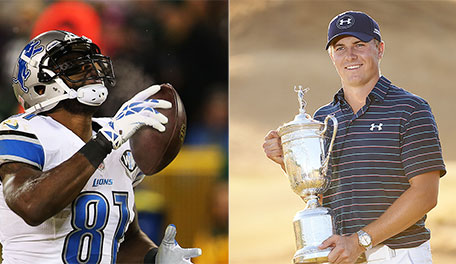 Before winning his second straight major championship on Sunday, Jordan Spieth was one of a handful of professional athletes featured in a piece by ESPN about Cleveland Cavaliers forward LeBron James' freakish athleticism. Specifically, they were asked whether LeBron was the greatest athlete in the world.

While many of the big names, including San Francisco 49ers tight end Vernon Davis, Pittsburgh Steelers linebacker Lawrence Timmons and Chicago Cubs outfielder Dexter Fowler, answered with an emphatic "yes," and claimed James could probably play any sport if he wanted to, Spieth wasn't ready to hand the title to just one guy.

“I would say yes, but I’d put into that same equation Calvin Johnson and Cam Newton,” said the 21-year-old. “As an athlete, I feel Calvin Johnson can do anything. Cam Newton’s hands are twice the size of mine. He’s a freak athlete. Or Bo Jackson still might be the best.”

Well, apparently, word got back to Johnson, the Detroit Lions wide reciever nicknamed Megatron because he does things like this, and over the weekend a signed football and jersey showed up at Spieth's office in Dallas.

No word yet on whether memorabilia from Newton and Jackson are in the mail, but considering the roll Spieth's been on, it certainly wouldn't be a total shock.

h/t to the Detroit Lions